“I just want to say that I think that your site is great. I hope to one day create a place where crafters can enjoy each others stories and share ideas. Keep up the good work.”

I'm a second generation wood craftsman, I love working with wood and love a challenge, I feel that making crafts is a form of art, and I try to keep some of my parents old crafting traditions alive in our shop.

This is a long story but an interesting one. I began my crafting career back in 1979 when my parents did their first craft show. My father was an engineer for a large company and very unsatisfied with his job and always looking for a new career to work in. My mother was a stay at home mom which was very creative. Mom worked for many of hours honing her painting skills while dad would tinker around on his band saw which was in the basement of the house. One day they just start combining their newly honed skills and made some of the most beautiful wood products you had ever seen.

Mom and Dad decided to make a go of selling some of their work so they booked a crafts show in Charlotte, NC. I still recall them talking after the show saying that they where so surprised that everyone loved their products and were surprised at how much money they had made. Two shows later my father quit his job and Crafting became a way of life. They started selling at larger shows and eventually started doing the Southern Christmas Show . I don't know if your familiar with this show but it's one of the best shows that a crafts person in the south could hope to get into. It's two weeks of overcrowded shoppers.

After they became successful enough they started their own craft shop. Their show was called Wood Creations and was located in a small southern town in North Carolina. My parents both had a very successful business until my mother was diagnosed with Cancer. By this time they had been in business for 20 years and didn't know any other way of life. Their business always depended on each other, Dad would cut the crafts and Mom would decorate and paint them. One without the other would just devastate the business. Mom passed shortly after being diagnosed and dad was left to survive the pain of both missing her and not knowing were to go next. Dad tried to make a go of the business but had to close his doors a year later. He eventually got a job as a carpenter and was diagnosed with bone cancer shortly after that. Dad lasted another year before cancer took him as well.

This is were I come into the picture. I had a job working for a large company as a Manager for over 18 years. On my anniversary date, the day I was to get a raise and my 4 weeks vacation was to start over, I was laid off. I was devastated, the economy had finally caught up with me. I had no idea were to turn or what to do. After a few weeks of looking for a job that was comparable to the one that I had lost, I realized that my parents had left me with a gift of creating and crafting. I decided to use the talents that they thought me to bring back some of the most treasured items and to create a few of my own. One of the items that they used to make which I now sell is our personalized name plaques.https://www.etsy.com/listing/86822131/girls-name-coat-rack-several-colors-to Mom and dad worked so long perfecting these and creating their own font. People just love them, to this day I'm told by people that they had one as a child and now they want to buy one for their children.

I would never want to go back to the corporate life. For me, standing at my saw cutting out treasures is a way of life. I just love it!

I find Inspiration every were I go. I was just walking through a dollar store and saw these cute little pumpkins which held a candle in them. I bought everyone they had, took them home, and created a ghost to hold them. I took them to the very next show and sold out of them. I also get good ideas from our customers. I have had several occasions when a customers asks if I can do something a little different for them. I put every creative bone that I have in making them something to be proud of.

I just recently did a project for a teacher which is trying to break a world record for the most rubber ducks. She said that her class is trying to collect more than any has ever done before. She asked if we could make some kind of historical figure which could represent her collection. I made the duck which is in one of my photos at the top. An Uncle Sam duck which has his very own duck count chalk board in his hand so that they can keep count as the go. 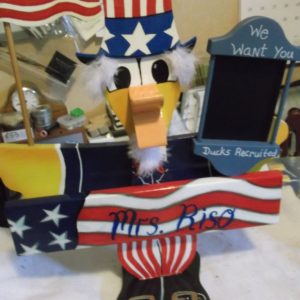 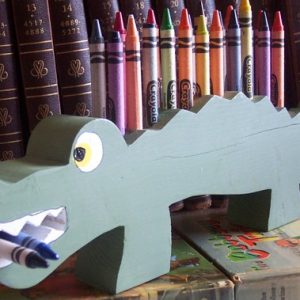 My wife and I love to go to craft shows in or around our town. We also sell on Etsy.

Why Handmade? Why not! People are buying so many items now that are made in China, Japan, etc. These items aren't given any thought other than how cost effective they can be produced and distributed. These items will never last like a hand made craft. I always say "Crafts are made to last a lifetime" to all my customers. I truly believe that all crafts people need to be supported by local consumers for their contribution to bringing business and jobs back to our wonderful Country. Besides, compare anything handmade to something bought that's been massed produced and you will see a huge difference in quality and durability. Handmade wins every time. 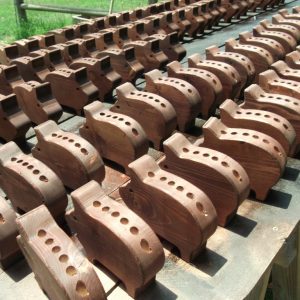